Nick Jonas Talks Trivia, the Most Competitive Jonas Brother, and Launching His Own Game 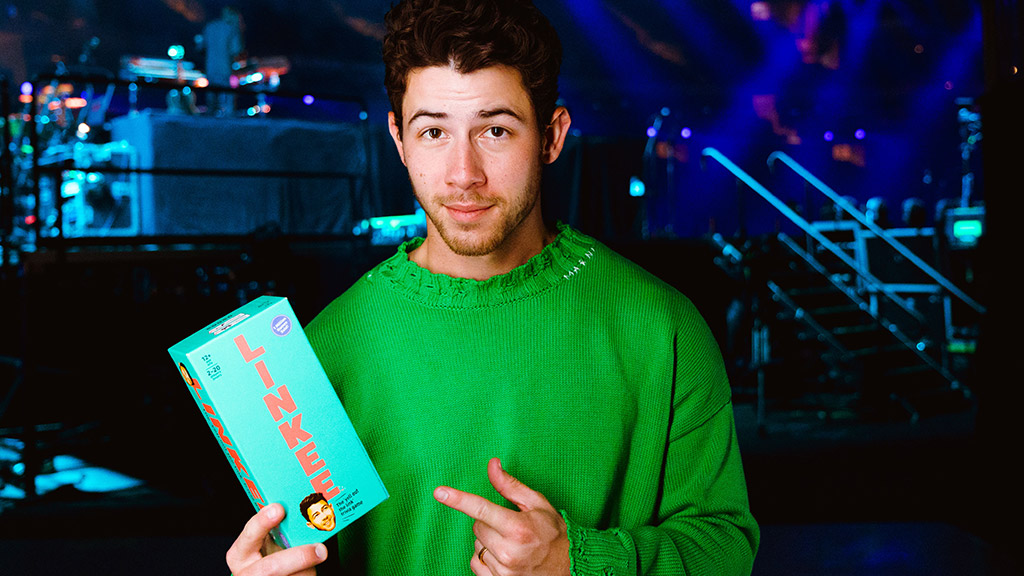 Nick Jonas is adding another accomplishment to his already-long resume: game collaborator.

The 29-year-old singer, songwriter, and actor, best known as being one of the Jonas Brothers, has teamed up with Big Potato Games to reimagine his personal favorite game. Nick Jonas’ LINKEE, now available at Amazon, Target, and Walmart, is the ultimate fast-paced, quick-witted trivia game.

Made for 2-20 players ages 12 and up, everyone will divide up into teams to work together and answer four trivia questions per card. Then, they must figure out the link between all of the answers and shout it out! Get the LINKEE right and win the card. And one of Nick’s tips? Shout out the answer even though you may not be 100% confident — there’s always a chance you were right!

Whether you’re a LINKEE newbie or a seasoned pro, this version has been updated for any player to pick up and easily learn to play. We had a chance to speak with Nick about the exciting launch of this game, which Jonas brother is most competitive, and which trivia category you never want to challenge Nick at.

Toy Insider: You have said before that the first time you played LINKEE was with Mick Jagger. How did you two end up playing together and what was that experience like?
Nick Jonas: It’s kind of a wild story. My wife and I were on vacation and got an invite from a friend who lived at the spot we were on vacation at to come to a game night — and it was Mick Jagger who invited us and taught us how to play the game, which was kind of surreal, of course. We got home, fell in love with it, introduced [it to] our friends, and kept playing. Eventually, word got back to Big Potato — the makers of LINKEE — that I loved the game and they heard the story and approached me about doing something with them, to collaborate on it. And I was over the moon because basically I’m in a spot in my life and career where I’m trying to find numerous ways to create entertainment, fun, and experiences for my fans. So whether that’s a show, a movie, even starting a popcorn company, or something like this, it all works towards the greater goal of creating those great experiences and great memories. I’m so thrilled that I get to introduce this game to a lot of people, and for those who already know it to put my personal touch on it.

TI: You were talking about LINKEE with your cohosts on The Voice, which then set the wheels in motion for your version of the game. How involved were you in the process of creating this new version?
NJ: I was very involved. I don’t do anything 50%, so I worked closely with [Big Potato] and the teams who create the packaging, then also some of the gameplay itself with some of the questions that I was involved in curating. And then, of course, the introduction of this game to a new audience and using my platform and social media to pump it up and get people excited about it.

TI: We sure are pumped! What differences are there between the game’s original version and your version?
NJ: I think the thing that really makes this fun is that personal touch with some of those questions that I was part in adding. This gameplay is so unique … in that it works really well in a group setting, but you can also play one-on-one. The card play itself and the way you kind of keep score with the spelling out of LINKEE and everything else was another factor. But I think it’s just really exciting for this version and also, you know, putting my face on it — obviously that’s a big difference! I never imagined I would have my face on a LINKEE box, but there it is.

TI: Dreams do come true! So, what is one of your favorite memories involving playing LINKEE?
NJ: The original memory of learning the game and that whole experience, but then introducing it to my brothers while we’re on tour playing after a show or even before a show. We like to get those competitive juices going as much as we can, so it’s always fun to play with them. And then we’ve had a lot of great experiences with friends back in LA and also during the lockdown period. I think one of the things that was really helpful for so many people was to be able to play games on Zoom with their friends and family around the world. And we did a lot of that and we definitely played LINKEE as well, which was a great way to take everyone’s mind off of what was a really crazy time.

TI: Definitely. Coming from the toy industry, we understand the importance of toys and games during the pandemic and playing as families. As a new father, what do you hope this game will bring to families in the U.S.?
NJ: I’m so excited for people in the U.S. to play this game with their families. There’s a lot of shared knowledge in families because you grow up together, you’re with each other all the time. A lot of the same information is shared with that group. So, it makes it really fun when you play in a competitive setting like this, where the speed of your answer is important and your ability to work as a team — or as individuals — to figure that answer out. It’s really so fun. I’m excited to see kind of how families play this out. I know that certainly my family, while we all have that shared information, we have different interests as well, so it affects our ability to know the answer to certain questions.

TI: We touched upon the importance of games and how they’re a really great family activity. Did you and your brothers have any favorites growing up?
NJ: We were big fans of Monopoly, obviously. We always loved playing Monopoly and Connect Four. Eventually, we got really into Catchphrase where you had the device and pass it around. We loved playing games and we were all very competitive. Rummikub was also a big one for me and my mom.

TI: Yeah, that’s a David-beats-Goliath moment for sure. But what is your trivia topic of choice or trivia topic that you are a master at?
NJ: I’m pretty good with Academy Award history, like who won Best Picture or who won Best Actor. I have a friend who literally knows every Best Actor and Actress and Best Film. He’s got every answer for every year. And so I’ve started to just listen in and ask him so I can learn it myself and steal his knowledge.

TI: Wow, that’s pretty impressive. I’ll make sure to never ask those questions around you. What’s the best trivia team name you can come up with right now on the spot?
NJ: That’s a tough one. You are putting me on the spot! I’ll say I live in the valley in California and have a lot of friends from Penn State, which is called the “Happy Valley.” So, we always go with the Happy Valleys, but spelled V-A-L-L-I-S because I played Frankie Valli in Jersey Boys, which will come out later this year. So a lot of interconnected things, but our team name is usually the “Happy Vallis.”

After I put Nick Jonas on the spot, he put me on the spot to test my LINKEE playing ability — and spoiler alert: I wasn’t fast enough! My questions were: “Buffy was known as a vampire what?” (Slayer); “What does an ‘x’ represent at the end of a letter or email?” (Kiss); “What type of knot is used to tie a noose at the gallows?” (Slip Knot); and “What is the name of the cruel medieval torture device shaped like a cabinet with spikes on the inside?” (Iron Maiden).

I couldn’t think of the last two in time, and even with a clue of, “You might need earplugs for this one,” my mind was still blank. (You try thinking of “Slip Knot” while speaking with Nick Jonas and see if your brain wouldn’t automatically become mush.) If you haven’t guessed it by now, the LINKEE is heavy metal bands!

After hanging my head in shame, Nick reassured me that it’s OK and it’s difficult to connect the dots if you miss one or two questions. (Thank you, Nick.)

How about trying a LINKEE for yourself? Courtesy of our Editor-in-Chief Marissa Silva, try to get the LINKEE here and leave your answer in the comments! 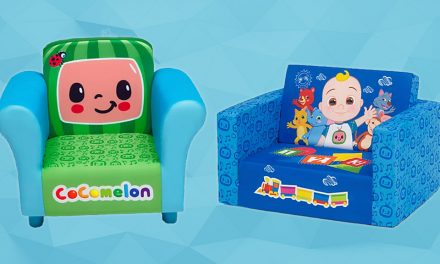 Cozy Up to Delta Children’s CoComelon Furniture for Kids

L.O.L. Surprise! Empowers Fans to be Fierce with New Dolls and Pop-Up Events