We’re getting a sugar rush from these surprise toys!

Candy Pops from Basic Fun are individually packaged candy-themed figures that kids can play with, fidget with, and collect. Each Candy Pop comes in either blue, pink, or yellow candy-shape capsules with shimmering tabs on both sides. Kids can pop open the outer capsule by pushing on the center to reveal a mysterious bag filled with a surprise Candy Pop figure, a scented sticker sheet, a coloring sheet, and a collector’s guide.

There are 14 figures to collect in the first series, including two super rare figures that kids can either pop, turn, or twist by fidgeting with the figure’s hair — which is designed to look like a part of the candy. Each figure has its own unique expression and outfit that corresponds to its hair color.

Part of the fun lies in discovering how each Candy Pop opens. For example, the blue capsule I opened had Chippy hidden inside, a purple character with pigtails. By twisting the right pigtail, the center of the toy twists to reveal Chippy’s winking face and her little body in a purple dress.

When I opened the pink capsule, I found Coco inside, a Candy Pop that opens with a turn of her ponytail, revealing a smiling face and a brown dress.

Whether or not kids receive a rare figure, they will still love to unbox and play with their Candy Pops, thanks to the variety each reveal provides. It’s super fun to open each capsule and discover which figure will join the collection.

Kids can play with the figures like dolls, hiding away their faces when it’s time for bed, or use them as fidget toys. The Candy Pops create satisfying “swish” and “click” noises when you open and close their faces, and the twist, turn, and pop movements are soothing and relaxing. Candy Pop is recommended for kids ages 3 and up, but the fidget effect makes them appeal to older kids, too.

With three ways to play and so many to collect, Candy Pop is bursting with fun. 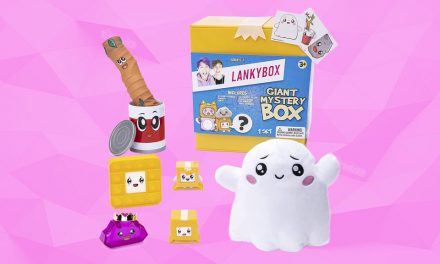 The LankyBox Giant Mystery Box Is Brimming with Fun