Celebrate 90 Years of LEGO at LEGOLAND This Summer with Prizes

Did you know that the name LEGO comes from the Danish words “leg” and “godt” — respectively meaning “play well?” And now, the timeless toy is embracing the “play well” vibe for its 90th anniversary celebration! This summer, LEGOLAND New York Resort, located in Goshen, New York, is celebrating LEGO’s 90th anniversary with 90 prize winners each week between June 10-Aug. 19.

Upon arrival, resort visitors will be able to get a slice of the celebration by checking out a 20-foot-tall cake made from 180,000 LEGOs. The party doesn’t stop there: All kids who visit LEGOLAND between Thursday and Sunday will receive a limited, special-edition lanyard. Each week, 90 kids will find a card in their lanyard indicating that they’ve won a special prize. The prizes range from popcorn and candy buckets to all-inclusive VIP LEGOLAND hotel stays.

This summer also marks LEGOLAND New York’s first birthday. To celebrate, the park will offer new entertainment shows, new LEGO models, and new events, including a “Red, White, & Boom! Celebration” for July 4. Select LEGOLAND locations around the globe — including LEGOLAND New York — will also invite guests to “Play YOUR Way,” with a series of interactive, in-park touchpoints where kids can express their creativity as they are prompted to play as five different play types: designer, maker, explorer, storyteller, or dreamer.

These parties are open invites! Families can get tickets and more information at legoland.com. 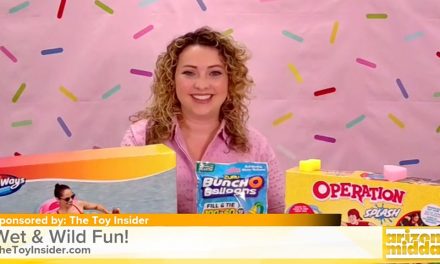 Water Toys to Make a Big Splash on NBC Phoenix

Toys For Your Thoughts Survey & Giveaway