The Go Banana Go! duo of Jim Roach and Brian Wecht entered the world of kid’s music in 2020 with their debut album, Hi-YA! The eccentric pair are continuing their catchy tunes in their second full length album, Dark Side of the Banana.

The time around, the inspiration for their comedic songs came from Roach’s and Wecht’s kids. Whenever they would say something particularly funny, the pair of dads would write it down and transform it into a catchy song. This method brought about songs such as “Chocolate On My Pants” — inspired by Roach’s daughter dribbling chocolate on her pants at a fancy brunch — and “Veggie Disco,” from a time  Wecht’s daughter invented a kitchen dance while her dad was making dinner. Go Banana Go! also took musical influence from Queen, DEVO, A Tribe Called Quest, and other artists to turn their eccentric ideas into a wide-ranging album.

The album features a collection of 17 unconventional songs, including “Opera Chicken,” “Ketchup for Breakfast,” “The Parts of a Worm,” and more. Fans of the first album can also listen to “Dinosaur Chicken Nugget (the Sequel),” the second part to the original song about dinosaur-shaped chicken nuggets.

Go Banana Go! fans can rock out to Dark Side of the Banana on Spotify, Apple Music, YouTube, and other popular music providers.

SpongeBob SquarePants Gets Even Squishier with New Squishmallows 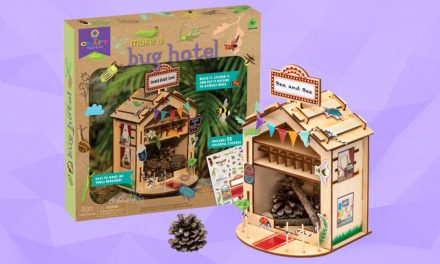